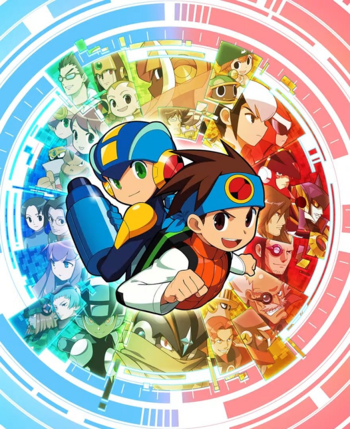 What if Dr. Light went into computer networking instead of robotics?

Mega Man Battle Network (Rockman.EXE) is a Spin-Off/reimagining of the Mega Man series. Set 20 Minutes into the Future relative to the early 2000s, everything is completely run by the Internet and life is more-or-less peaceful. Everything — cars, refrigerators, toliets, schools, the weather — literally Everything Is Online.

The programming required to run society has gotten so complicated that humans cannot comprehend it by themselves. So they've created helper Artificial Intelligences, called Network Navigators ("NetNavis" or "Navis" for short). The stars of the series are the initially 10-year-old Lan Hikari and his NetNavi partner, MegaMan.EXE.

Since power in this universe is through the Internet, public enemies are those who would conquer or destroy it. Viruses are monsters that must be destroyed, and hackers are able to control all of the things mentioned above that the Internet is connected to — even the Mafia is Internet-based. Lan and MegaMan, naturally, have to face these forces off.

The real world and the Internet are separated from each other. Lan can help MegaMan out by giving advice and plugging in "Battle Chips" that grant MegaMan special powers in battle, but he is more or less isolated from the action - unless the part of the Internet that is being affected controls the environment he is currently in, like a runaway train, a cruise ship, the oven of his house, etc.

The series is best known for its unique battle system. It's complicated in theory, yet simple in practice. Combat is conducted on a six-by-three block grid, with MegaMan on the left and his enemies on the right. When your meter fills up, you can select a certain number of battle chips to blast your enemies in real time while dodging their attacks. They can damage, heal, claim more territory for you, damage or remove enemy territory, summon assistants, and a host of other effects. Those are the basics, at least.

The series lasted for six main games with a few side games before ending, and is the second series in the Mega Man franchise to reach a proper conclusion. It spawned a sequel series focusing on radio waves and set 200 years in the future, Mega Man Star Force.

Like Mega Man (Classic) and Mega Man X before it, Battle Network would receive a Compilation Rerelease, announced in 2022 with a release in 2023. Mega Man Battle Network Legacy Collection contains each version of the main six GBA installments and notably brings them to non-Nintendo systems for the first time.

It also has more than one Spiritual Successor (to its gameplay) in One Step From Eden and EndCycle.