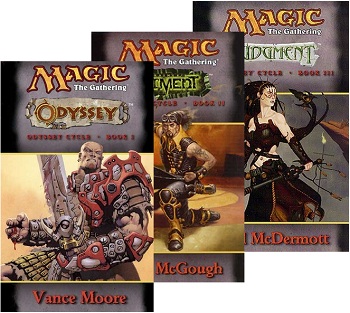 This cycle of Magic: The Gathering novels, the first new story after the massive Weatherlight Saga, corresponds to the Odyssey block in the card game. The Odyssey Cycle (comprised of three novels: Odyssey, Chainer's Torment, and Judgment) takes place in Otaria

, a subcontinent of postapocalyptic Dominaria. The plot revolves around a powerful Artifact of Doom called Mirari

, a magical orb that can transform the wielder's deepest desires into reality. In many ways, it's a return to the basics, with only small links to previous storylines, so players new to the storyline could jump right in. The story of Otaria is concluded in the Onslaught Cycle.

Not to be confused with The Odyssey.

The Odyssey Cycle provides examples of the following tropes: