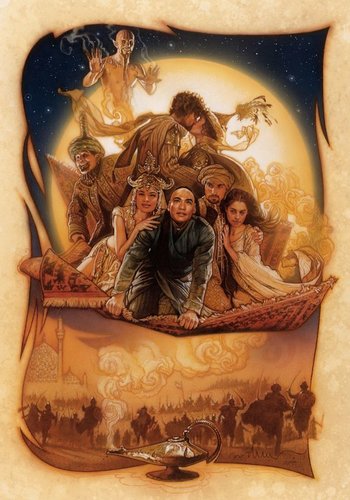 An epic worthy of a Drew Struzan poster!
Advertisement:

Arabian Nights is a 2000 TV mini-series based on the One Thousand and One Nights story cycle.

As in the original, it consists of a series of stories told by Shahrazad to her husband, the mad Sultan Shahryar, to forestall his determination to have her executed before she can betray him as his first wife did. This adaptation elaborates on the first wife's betrayal, revealing that she was not only having an affair with Shahryar's brother Shahzaman, but the two of them conspired to overthrow him. It is also said that Shahryar only remarried because of a law requiring him to do so or give up the throne (in which case Shahzaman would get it after all).

To prevent things going on for the traditional 1001 nights — this is, after all, only a mini-series — a subplot is added in which Shahzaman is preparing to take the throne by force. In the end, Shahryar battles and defeats his brother, drawing inspiration from the stories Shahrazad has told him, and they live happily ever after.

It also includes a version of the tale of "The Appointment in Samarra" (not from the source material), told to Shahrazad by a marketplace storyteller she asks for storycraft advice.

The frame story features Dougray Scott as Shahryar, Mili Avital as Shahrazad, and Jim Carter as Grand Vizier Ja'Far, Shahrazad's father. Familiar faces in the stories include Rufus Sewell and Andy Serkis as Ali Baba and his hapless brother Kasim, Alexei Sayle as Bak-bak the hunchback, Jason Scott Lee and John Leguizamo as Aladdin and his jinn, and James Callis as one of the Three Princes.