Literature / Only Villains Do That 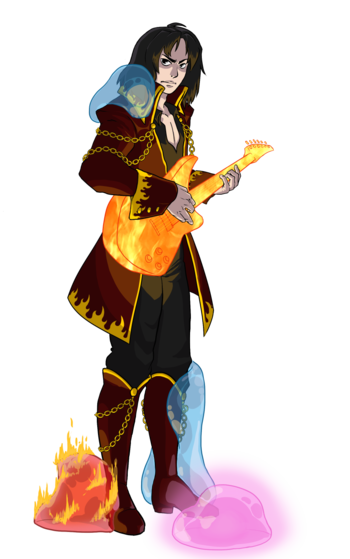 In which the Dark Lord plays with fire
While waiting on an Akihabara train platform one day, ordinary high schooler Yoshi Shinonome was suddenly plucked from his normal life in Japan and whisked away by a beautiful goddess to Ephemera, a world of magic and adventure, to serve as her Hero and drive back the evil Dark Lord.
Advertisement:

This is not his story.

Standing nearby at the moment Yoshi was isekai'd was a man named Seiji - a rude, cranky, misanthropic musician who was not at all pleased to find himself also snatched up and transported to Ephemera by the goddess's wicked sister, Virya. According to this self-proclaimed Goddess of Evil, the whole fantasy adventure thing was a game she and her sister played to stave off the boredom of immortality, and since the good goddess, Sanora, had picked her Hero...well, Virya needed a Dark Lord.

Only Villains Do That

is a web serial novel by D. D. Webb (of The Gods are Bastards fame) updating Tuesdays and Fridays. It is an Affectionate Parody of the isekai genre, and while generally light-hearted the alternate world of Ephemera is not a nice place. Expect lots of Mood Whiplash.

Only Villains Do That provides examples of: