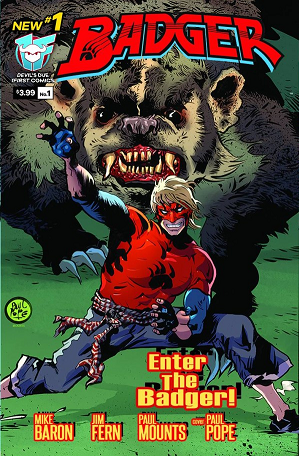 The Badger is a comic created by Mike Baron, originally published by Capital Comics in 1983 and then moving to First Comics with issue #6.

The Badger, otherwise known as Norbert Sykes, is a Vietnam war veteran and vigilante with multiple personalities. The one most dominant is the Badger, but the others include Max Swell, nine-year-old Emily, and Pierre. The persona of the Badger is Norbert's coping mechanism for his PTSD.

Norbert works as a bodyguard for Hamilton "Ham" Thorndyke, a 5th century druid who was put into a coma by the rest of the wizarding community and woke up in the 20th century. Also employed by Ham is Daisy Fields, a clinical psychologist, who acts as his secretary when not providing therapy for Norbert.

The series tends to be tongue-in-cheek while also providing occasional biting political commentary.

No connection to the BBC show Badger.