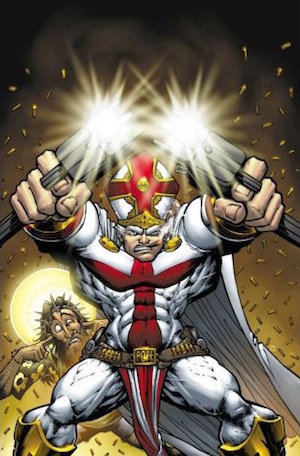 He kicks arse for the Lord.
Advertisement:

WHEN HE'S NOT LEADIN' MASS, HE'S OUT KICKIN' ASS!

Once upon a time, there was a man. He worked hard and climbed up in the Church's hierarchy, and finally, he was elected Pope Oswald Leopold II. He lived his life womanizing, drinking, cussing, and generally having fun — and nobody could as much as raise a finger against him, since he was the POPE!

And then, Rapture came.

God, seeing that people are no good, condemned them all, and the gates of Hell opened. The war between Earth and Hell was long and bloody, but eventually both sides finally reached a truce: The gates of Hell were closed, but demons were allowed to stay on Earth. The Pope, losing his power and wealth, devolved into a drunkard living in a one-room lot.

One day, he saw a girl being molested by several thugs. He rescued her and fought off their demon friend Belaam, and the girl showed her generosity. Later that night, Belaam ambushes them, killing the girl and the Pope... just before Jesus blows him away with a revolver. Pope woke up in Heaven in the presence of God and Jesus. God gives Pope a task: if he can return to Earth and rescue St. Michael from Lucifer, Pope will be granted entry into Heaven despite his deplorable life-style. Granted with divine super strength and a caped costume, the Pope and Jesus must now find Hellcorp, fight through Lucifer's forces, and complete their divine mission.

Created by Robert Kirkman and Tony Moore, and originally published under the moniker of Funk-O-Tron in 2000.