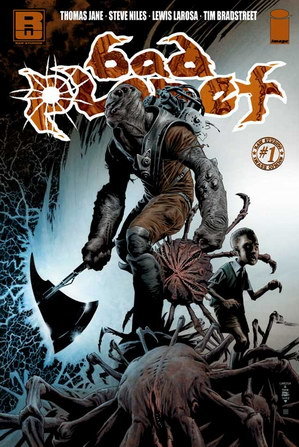 400 years ago, an alien ship carried a gigantic asteroid as cargo that ends up being lost in the vastness of space. Fast-forward to modern times, the asteroid is about to collide on Earth, but it ends up dissolving upon entering into the atmosphere releasing two spacecrafts from within, one landing in Washington D.C. and the other in Bloedriver, South Africa. Alien spiders emerge from the UFOs and they start slaughtering everything around them and humans are unable to stop them. Their only hope lies in the last survivor of an alien race that was also destroyed by the spiders and wants to find some redemption by preventing what is happening on Earth the same thing that happened to his world: becoming a Bad Planet.

This is brainchild of actor Thomas Jane in conjunction to Steve Niles, Bruce Jones and Tim Bradstreet. The premise was literally conceived on drugs as Janes was hopped on Vicodin following a car accident, where he dreamed about horrible alien deathspiders. The first issue was released in December 2005 with planned 12-issues though a very irregular schedule with the most recent issue being released on 2013.

A first volume was released with the first 6 issues on TPB format with some sections having 3D pages. The second volume was promised in 2010, though only two issues have been released so far. There is no word on whether the series will be concluded or not.

This comics features examples of the following tropes