Literature / The Witches of Worm 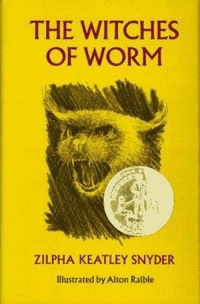 The Witches of Worm is a Newberry Honor 1972 Young Adult book by Zilpha Keatley Snyder about a girl who believes herself to be coming under the sway of a witch's cat.

Jessica is a gangly teenage girl being raised by her gorgeous, but over-worked, single mother. Jessica has few friends her age, and spends much of her free time reading and imagining things. One day, she discovers an abandoned newborn kitten, which she names Worm due to his lack of sight and extremely short fur. As Worm gains strength, Jessica starts to believe that Worm is talking to her, and forcing her to do bad things. Feeling less and less in control of her actions, Jessica seeks a way to free herself of these compulsions.