Fanfic / Through the Well of Pirene 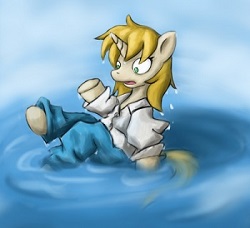 "Yeah?" Kiln took a step forward. "What makes you think that just because you were chosen, that makes you special?" Her lip curled. "Prophecies ain't set in stone. They're instructions, guidelines. And you know what? Maybe we do need a new Chosen One."
Advertisement:

Through the Well of Pirene

and published on FIMFiction, is the story of one Daphne Ocean, her little sister Amelia Ocean, and Daphne's long lost childhood friend Leit Motif. The story begins late October, 2011 in an unnamed town in Massachusetts, outside of the fictional Everfree State Park. In a bid to entertain her sister while their parents are out of the house for the night, Daphne takes Amelia into Everfree State Park, the very place she met her childhood friend, Leit Motif, a young unicorn filly from the land of Equestria. Daphne and Amelia are separated, and both traverse the magical pathways between Everfree State Park and the Everfree Forest of Equestria-Amelia to run away, and Daphne to come after her. The two sisters are swiftly entangled in an ancient prophecy and a twisted plot spanning multiple worlds.

Through the Well of Pirene is written as a first person narrative following the perspectives of Daphne herself, Amelia, and later Leit Motif upon Daphne's arrival in Equestria, switching perspectives approximately every chapter to keep the story rolling upon the two girls' divergent paths. It has many inspirations, including Labyrinth, The Chronicles of Narnia, and The Lord of the Rings, as well as taking inspiration and borrowing elements from Norse, Indian, and other mythologies.

Now has a complete audiobook adaptation available for listening on Youtube

Through the Well of Pirene contains examples of the following tropes: