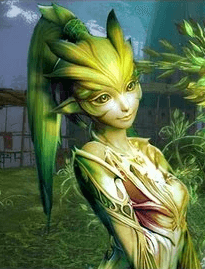 What do you mean this isn't what you meant by "hair roots"?
Advertisement:

Whenever Plant People show up, they are almost guaranteed to have Plant Hair.

Plant Hair is when a character, usually a plant, has leaves, vines, flowers, and other foliage-related paraphernalia instead of hair.

This can be a Justified Trope because having leaves on top of your head makes them less concealed from the sun, so photosynthesis is easier. Although most of the time it just looks good. That doesn't excuse Humans with Plant Hair, when the Plant People look exactly like humans, except for their Plant Hair.

Note that the character in question doesn't have to be a plant. They just have to have foliage-related stuff instead of hair.

Is a Elemental Hair Composition as hair that isn't actually "hair".