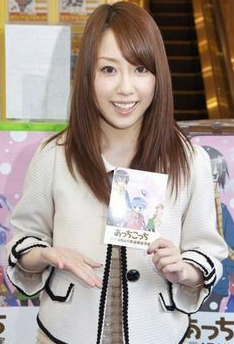 Kaori Fukuhara is of the newer seiyus (born August 11, 1986 in Chiba Prefecture, Japan) whose breakout role is Cloud Cuckoo Lander Tsukasa Hiiragi in Lucky Star. She seems to have become typecast as a result for Moe ditz roles (sometimes bordering on Too Dumb to Live), but the ruthless moeblob mah-jong champion Koromo Amae from Saki could be considered a subversion on that.

Relationship Voice Actor to some extent with Aya Hirano and Minori Chihara, both costars on Lucky Star.

Hasn't done much voice acting with Emiri Katou (who played Tsukasa's twin sister Kagami) outside of Lucky Star, but the two are good friends, and have even done some musical jam sessions together (Kaori on bass and Emiri on drums). Apparently both used to play those instruments in high school. In Fall 2011, both ladies appeared in Ad-Lib Anime Laboratory an experimental ad-lib anime

in which they ad-libbed lines first which were then subsequently animated. They also released an album together