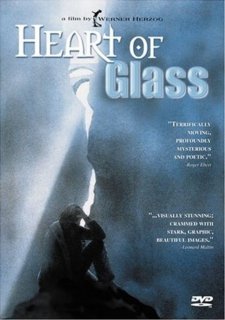 Heart of Glass (Herz aus Glas) is a 1976 film by Werner Herzog. One of his weirder ones.

A small town in the forest regions of Bavaria, late 18th century. The local economy is based on glassmaking—especially on the glass factory's one exclusive specialty product and moneymaker, the brilliant red "ruby glass". But when the foreman of the factory dies suddenly without having initiated anyone else to the secret formula, nobody is able to recreate the red glass. The factory is in decline, and with it, the whole town falls into despair.

Hias, a cowherd who has the reputation of a clairvoyant, leads a solitary life in the forests. The young baron, owner of the glass factory, obsessed with the lost secret and spiralling into madness, turns to him for help—hoping that Hias' psychic powers can recover the recipe.

But that isn't weird. What is weird is that Hias receives visions and makes long prophetic monologues that may or may not predict 19th and 20th (or 21st?) century history, and that all people except Hias and the glassmakers act as if they were hypnotized. In fact, says Werner Herzog, they were hypnotized. Why Hias wrestles with an invisible bear near the end is anyone's guess.

Heart of Glass contains examples of: