Fanfic / Harry Potter And No One In Particular 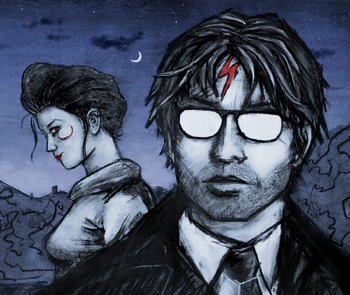 'No One In Particular' with middle-aged Harry Potter

Harry Potter and No One In Particular

is the other sequel to Harry Potter and the Portrait of What Looked Like a Large Pile of Ash... and is just as bizarre as its predecessors.

Imagine, if you will, an older Harry Potter, middle-aged now, dealing with his job at the Ministry of Magic, his snarky assistant Mavis, his midlife crisis, the ongoing wars, and the death of one Hermione Granger. Now imagine, that Hermione was not actually dead, that an old friend had become the new Dark Lord, that everyone had secrets and plans and secret plans... and how about this mysterious woman whose been plaguing Harry Potter's dreams, the one with a crescent moon scar upon her cheek? Now imagine it was all in the style of a Film Noir as written by David Lynch. That is Harry Potter And No One In Particular.

Unlike previous entries in the canon of computer-written Harry Potter fanfiction, No One in Particular was written mostly with the help of GP2T, rather than Botnik. Co-written and edited by Smashiell, best known for his animated adaptation of Portrait of Ash

. Also notable for being, unlike its siblings, almost coherent. Almost.

The playlist can be found here

"Aunt Petunia was sitting in the kitchen with her son Dudley, watching the television and drinking coffee laced with milk from a cow that had died three days earlier.":