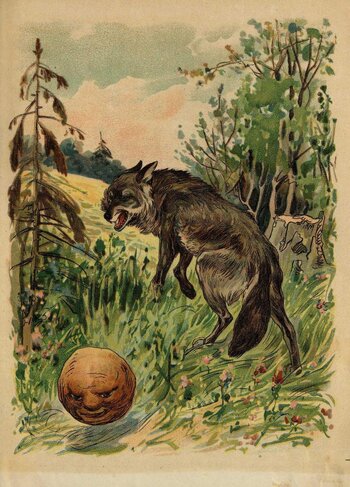 Kolobok (Russian: колобо́к) or The Little Round Bun is a Russian Fairy Tale published by Alexander Afanasyev in his (Narodnye russkie skazki) collection. A Kolobok is a Russian little round bread, based on a similar Swedish food.

An old, poor granny bakes a kolobok for her and her husband, but the round bread suddenly comes to life, jumps out of the window and rolls along the road.

The kolobok runs consecutively into several animals (a rabbit, a wolf and a bear) who intend to eat it, but the round bread gets away from them by distracting them with one song. Then Kolobok runs into a fox, and it also tries to give her the slip by singing. However, the fox praises its song, and regretting to be too hard of hearing to understand it properly, asks if Kolobok can come closer and sing again. Kolobok climbs to her face, starts singing, and the fox eats it.

In the Aarne-Thompson-Uther index it is classified as a Type 2025, "The Fleeing Pancake", a very common tale spread across Scandinavian, Slavic and Germanic countries. Variants include the German tale "The Thick Fat Pancake" ("Der dicke fette Pfannkuchen"; link

), the Norwegian tale "The Pancake" (""Pannekaken") collected by Asbjørnsen and Moe, and the English "The Gingerbread Man". Some of those tales can be read here