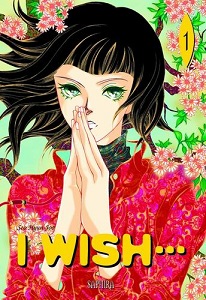 I Wish is a Korean manhwa by Seo Hyun Joo and ran for a total of 7 volumes.
Advertisement:

The story starts with the heroine Lyu-Jin, angry that her parents and older brother are off to a trip to Hawaii while she stays home with a cold, and wishes that the plane would have an accident before it arrives. Promptly, the airplane explodes mid-flight and Lyu-Jin is left alone and an orphan.

She heads over to a man called K, a magician who supposedly fulfills his client's any wish and gets their client's most treasured possession in return. K can't revive her family, since he cannot fulfill wishes that involve life and death. Due to the rule that nobody who sees his face can leave without wishing for something, Lyu-Jin now works as a housemaid for him and an unofficial helper for his "work" until she can think of a wish to ask of him.

The story mostly follows Lyu-Jin and K, the various clients and their wishes brought to them and reveals how many magical races or beings there actually are.

Not to be confused with the movie I Wish which is something entirely different.

I Wish contains Examples Of: