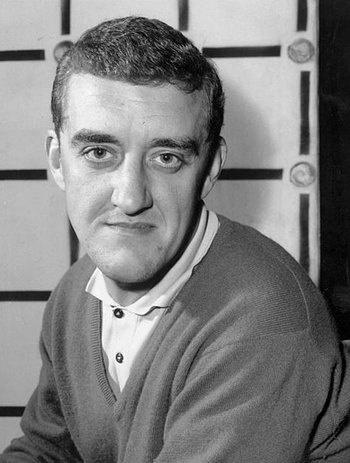 And so, we 'ad a cuppa tea...
"Learn the lines, stand up and do it to the very best of your ability."
Advertisement:

Bernard Cribbins, OBE (29th December 1928 - 28th July 2022) was a veteran English actor and singer, known for being the voice of The Wombles and for his appearances as Wilfred "Wilf" Mott in Doctor Who.

He debuted on stage at the West End in 1956 in The Comedy of Errors and continued in theatre shows for the rest of the '50s, and then released three comedy songs in 1962: "Right Said Fred", "The Hole in the Ground" and "Gossip Calypso". They were produced by The Beatles producer George Martin and were very successful in the UK Singles chart, with "Gossip Calypso" just about scraping the top 30. The band Right Said Fred (of "I'm Too Sexy" fame) are named after one of his other songs.

Cribbins' first film appearance was Two Way Stretch in 1960 and mostly stuck with comedies. In 1963 and '64, he briefly joined the popular Carry On film series as the leading straight man in Carry On Jack and Carry On Spying, which were really successful at the British box office. Two years later, he appeared in the Doctor Who movie Daleks' Invasion Earth: 2150 A.D. as Constable Tom Campbell and featured in She, and appeared in '70s films Frenzy and The Railway Children.

At this point, Cribbins mostly appeared in voice acting, particularly for children's TV shows. He did the voices for the characters from The Wombles, appeared over 90 times in Jackanory, provided the narration for the original Simon in the Land of Chalk Drawings, and voiced cartoon mascots for TV business commercials, as well as a couple of radio appearances.

Cribbins made some appearances on television as well, such as The Avengers, Worzel Gummidge, Fawlty Towers, and even had a TV series of his own called Cribbins on ITV. He returned to the Doctor Who scene in the mid-2000s to portray the grandfather of the Tenth Doctor's companion and gave a memorable appearance on the 2009 Christmas special on the departure of David Tennant from the series.

In the 2010s, Cribbins continued to make brief appearances on television, but mostly stuck to appearing onstage around the UK; young children that watch CBeebies may have watched his show Old Jack's Boat. He received an OBE in 2011 for his services to drama and received the JM Barrie award in 2014.

If you aren't familiar with his work, however, you might recognise him from some commonly-used Doctor Who reaction gifs, including one of him crying

◊ from "The End of Time", which has been used even in regions where Doctor Who isn't traditionally broadcast at all.

His roles in works with pages on TV Tropes: