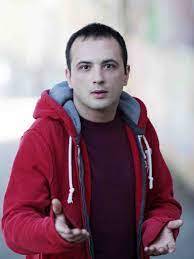 Simone Crisari (born August 30th, 1981) is an Italian dubbing voice actor from Rome, who is active in both live-action and animation.

He's the Italian voice of Michael B. Jordan and Jonah Hill in most of their roles. Among his TV voice roles, there's Jake Peralta in Brooklyn Nine-Nine and Samwell Tarly in Game of Thrones.

Some of Crisari's roles include: