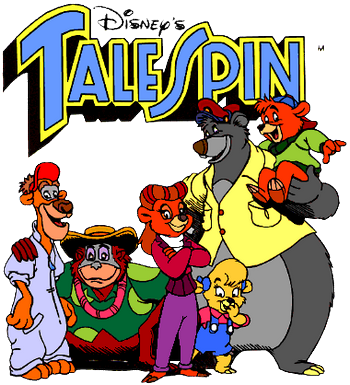 Another Disney adventure cartoon from The Disney Afternoon era, this 1990 series transplants several characters from Disney's adaptation of The Jungle Book into a show about the golden age of seaplane travel, featuring a World of Funny Animals. Essentially an animated Tales of the Gold Monkey - especially as the heroes have Indiana Jones-style adventures and one of the key locations is Louie's, an island bar run by the titular orangutan. Also has elements of a Lighter and Softer, Disney version of Crimson Skies (particularly the Air Pirates; see below).

Baloo the bear is a seaplane cargo-for-hire operator from the port city of Cape Suzette in a time not unlike the 1930s or 1940s. His twin-engine flying boat, the Sea Duck, is his most prized possession, and he favors his freedom over all else, including paying his bills. When the bank forecloses on his debts, a young entrepreneur/lady bear/single mother named Rebecca Cunningham snaps up his business, his plane, and his home, and opens the "Higher-For-Hire" air cargo service. Rather than abandon his "baby" to her and whatever low-rent pilot she may hire, he stays on, working for the day when he can buy back the Sea Duck and be rid of her.

Early on, he picks up a young stowaway, Kit Cloudkicker, who eventually earns the post of Baloo's navigator and sidekick. A daring barnstormer and aspiring pilot, Kit uses a collapsible airfoil to glide behind the Sea Duck on a line, and is responsible for much of the derring-do of the series in contrast to his overweight chum.

Outside the odd subtle occasion, there's not a lot of romance between Becky and Baloo: their relationship smacks more of Sibling Rivalry. Baloo, Kit, Becky, and Becky's adorable daughter Molly form a definite sitcom family dynamic, with the practical, strait-laced Becky faced off against her lazy, easygoing, roguish pilot.

Allies of the crew include Louie (the orangutan monarch from The Jungle Book) who operates a seaplane truckstop of sorts out in the ocean that is Baloo's favorite hangout; and Wildcat, a seemingly slow-witted mechanic with incredible skills.

There are three major antagonists: the Air Pirates, led by Don Karnage, who operate from a giant flying aircraft carrier called the Iron Vulture (and would have long ago plundered Cape Suzette, had it not been for all those big honkin' guns on the nearby cliffs); the country of Thembria, a pseudo-Soviet totalitarian state full of snow and blue warthogs, home to the napoleonic Col. Spigot and his Sergeant Schultz-like sidekick, Sgt. Dunder; and Shere Khan, the most feared predator of The Jungle Book, transformed into a Noble Demon business executive.

Refer to the Character Sheet for more details.

The TaleSpin series is considered, to a point, canon to the DuckTales (2017) series. Don Karnage and his pirates have been recurring villains in every season. As well, Kit and Molly appear in Season 3, both of them older and Kit now the pilot of the Sea Duck.

"Tropes for life, through thick and thin":