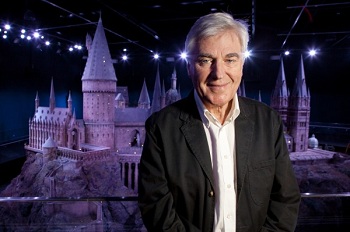 Norman Stuart Craig OBE (born 14 April 1942) is a production designer who has won Academy Awards for his work on Gandhi, Dangerous Liaisons, and The English Patient. Some of his other work includes The Elephant Man, The Mission, Memphis Belle, The Avengers, and Notting Hill. His frequent collaborator is set decorator Stephanie McMillan.

For all eight Harry Potter movies, Stuart Craig has been the production designer and Stephanie McMillan has been the set decorator. He is often regarded as the unsung hero of the franchise, although he's been called that so much that the "unsung" part might not be appropriate anymore. But maybe he deserves even more credit. Who designed the exterior of Hogwarts? Stuart Craig. Who designed every room in Hogwarts which wasn't filmed on location? Stuart Craig. Diagon Alley? The Burrow? Hogsmeade? The Ministry of Magic? You're probably getting pretty good at this game.

Essentially, the filmic version of Harry's world is the creation of Stuart Craig and his team. Assuming Harry Potter will last forever (and let's face it, at this point it probably will), he has created some of the most iconic images in the history of cinema. J. K. Rowling has called him a "genius" and insisted on his involvement in designing The Wizarding World of Harry Potter theme park (she got her wish).