Series / Tales of the Unexpected 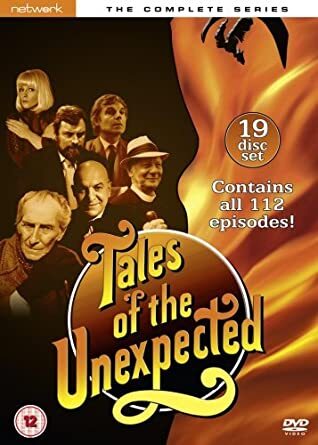 Tales of the Unexpected was aired between 1979 and 1988 by ITV. It was produced by Anglia Television, and it proved a big success for them.

The series began as an adaptation of Roald Dahl's series of short stories by the same name. They ran out of adaptable stories (there were a few more they could have done but they did not lend themselves to a TV adaptation) after about one and a half seasons and started using other works. Dahl did an introduction for every story for the first two seasons, but severed ties with the project before series 3. They then ran up until series 9.

The tone varied from story to story but on the whole it has been described as like The Twilight Zone (1959), but with a darkly humorous slant, especially in the Roald Dahl stories. The show had a low budget but the writing lead to an amazing list of Guest Stars including: Cyril Cusack, Anna Neagle, BRIAN BLESSED, Timothy West, John Gielgud, Richard Johnson, Elaine Stritch, Gloria Grahame, Peter Cushing, John Mills, Julie Harris, Wendy Hiller, Joseph Cotten, Derek Jacobi, Janet Leigh and Siobhan McKenna.

Examples of the more famous Dahl stories are William and Mary, in which Mary learns that her husband has cheated death via a brain transplant; The Landlady, in which a seemingly charming old lady is really murdering and stuffing her tenants; The Way Up to Heaven, in which an abusive husband is trapped in a lift, and his long-suffering wife deliberately leaves him there to die, and Lamb to the Slaughter, in which a wronged wife batters her husband to death with a frozen leg of lamb and then gets away with it by getting the detectives (including BRIAN BLESSED) to Eat the Evidence.

Several episodes are remakes of stories that had already been adapted for other series, such as Alfred Hitchcock Presents ("Lamb to the Slaughter", "The Man from the South") and Way Out ("William and Mary").

Not to be confused with the much less successful 1977 series Quinn Martin's Tales of the Unexpected. This series was also aired on ITV in the UK, but under the name Twist In The Tale.