Film / The Wrong Arm of the Law 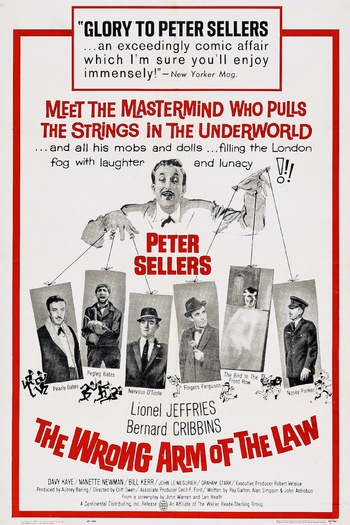 The Wrong Arm of the Law is a 1963 British caper comedy film directed by Cliff Owen and starring Peter Sellers, Lionel Jeffries, and Bernard Cribbins.

Something unusual is happening in London's criminal underworld. A new gang of crooks from Australia is going around dressed as police officers and lifting the ill-gotten gains of the local crooks. Things soon escalate, and it gets to the point where the robbers start ambushing the actual cops, assuming they're beating up the Aussies.

Soon, the local rival gangs — including those led by "Pearly" Gates (Sellers), who daylights as a legitimate fashion designer, and "Nervous" O'Toole (Cribbins) — gather for an emergency meeting and vote to propose an alliance with the police to get the IPO gang out of the way, with Pearly as their representative. Hilarity Ensues as the two parties of strange bedfellows prepare for war on the IPO gang.

A young, uncredited Michael Caine appears briefly as a constable.