Film / Grace of My Heart 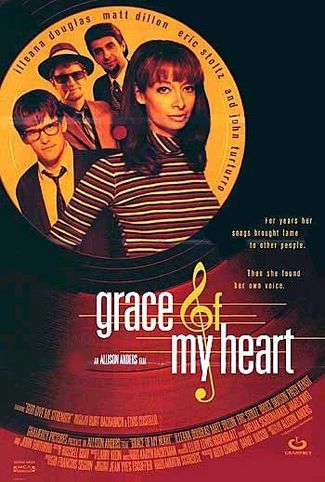 A 1996 film by Allison Anders, telling the story of Edna Buxton (Illeana Douglas), a steel heiress from Philadelphia who becomes a respected singer-songwriter, and who is not at all a No Celebrities Were Harmed version of Carole King. An affectionate look at the Brill Building era, it's also a tender and surprisingly tough-minded portrayal of a talented and independent-minded female protagonist who nevertheless repeatedly sacrifices her own ambitions for the sake of other people, until she learns, well, not to.

Philadelphia, 1960 or so: gawky Edna enters a vocal talent contest in defiance of her mother, who thinks she'll make a fool of herself. Instead, Edna wins, and uses the money to record a demo of her own song. However, the demo producer (Richard Schiff) tactfully lets her know that the music industry no longer wants girl singers. He advises her to go and see producer Joel Milner (John Turturro) at the Brill Building, as there is always a need for songwriters.

Joel takes Edna under his wing and renames her "Denise Waverly", setting her to write songs for a male doo-wop group and introducing her to leftie intellectual fellow songwriter Howard Caszatt (Eric Stoltz). The Unresolved Sexual Tension between Denise and Howard quickly resolves itself, and when she becomes pregnant, they marry.

Joel sets Denise to work with English songwriter Cheryl Steed (Patsy Kensit), on a song for teen ingenue Kelly Porter (Bridget Fonda). Denise and Cheryl are initially wary of each other, but they bond when they realise that Kelly is far more complex and interesting than they thought; the resulting song "My Secret Love" is a hit.

Denise finds that Howard is sleeping with other women, and their marriage breaks down. She embarks on an affair with kindly married DJ John Murray (Bruce Davison), but it becomes clear that he won't leave his family for her when he moves to Chicago. Joel tries to console Denise by letting her record her own song, "God Give Me Strength", and assigns her California music wunderkind Jay Phillips (Matt Dillon) to produce it. To her surprise, Jay loves the song and does a great job, but the record bombs. The Beatles are changing the face of music, and Joel has gone bankrupt. Denise blames herself, but Joel's philosophical.

Denise and Jay fall in love and she goes out to California to be with him, but his behaviour becomes more and more erratic as he has to fight both his own band and his own self-doubt and depression, all the while ingesting heroic quantities of weed.

In the end, the film shows how Denise deals with the various traps life throws at her, struggling to achieve some kind of confidence, wisdom and self-sufficiency.