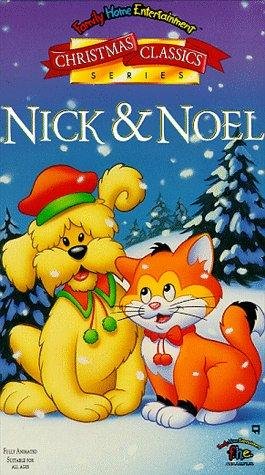 Nick & Noel is a 1993 animated Christmas special produced by Film Roman. It was released as a promotion for Toys R Us and a direct-to-video movie that was only available for purchase at Toys R Us stores throughout most of The '90s. When purchased, it came with a storybook that had the same story as the film. The film is roughly 21 minutes long.

The film has a female cat named Noel who belongs to a little girl named Sarah, who only has her father after her mother supposedly passed away. They have just moved in to a Victorian duplex where their neighbors are a famous singer named Leslie Lee and her male Terrier dog named Nick. From the start, the two neighbors do not get along. Leslie's constant singing with Nick morning, noon, and night distracts Sarah's father in his work, and Nick and Noel constantly fight due to...being a dog and a cat. They even sing about their differences! Anyways, the story really begins when Sarah writes her Christmas list to Santa. She only wants one thing: a mother. However, Sarah's father is so busy with a deadline that he forgets to mail the letter. It is up to Noel to deliver the letter to the North Pole, so she seeks Nick to ask how to get there. Nick agrees, but only if Noel calls him "Maestro". After reluctantly doing so, Nick tells Noel that it is at the end of "North Street". Nick then decides that he should accompany Noel on her quest because he doesn't want Noel to prove that cats are braver than dogs. Meanwhile, Sarah's father and Leslie bicker again, until Leslie asks Sarah's father if she and Sarah can go shopping. After thinking about it, Sarah's father lets her daughter go shopping with Leslie. Soon, Nick and Noel reach "Santa's Wonderland" and think that it is the North Pole. Unfortunately, just when they arrive, the Santa there leaves and the place closes down. Meanwhile, Sarah's father, Sarah and Leslie realize that Nick and Noel are gone. That must have been a quick shopping trip! Nick and Noel try to find Santa but end up running into a guard dog. Hilarity Ensues for a brief moment, and Nick and Noel escape Santa's Wonderland and look for Santa elsewhere. Suddenly, Sarah's letter to santa blows away in the wind and falls into a sewer! Can Nick and Noel give Sarah her Christmas wish in time?

This film is narrated by a mouse who serves little to no purpose throughout the story.