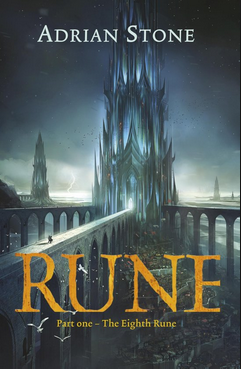 Rune Duology is a Dutch fantasy duology by Adrian Stone, consisting of The Eighth Rune and The First God, and the sequel to his earlier Devil Trilogy. Like its predecessor, the books were originally published in Dutch and an English translation is available in an ebook-only edition.

Marak Fourfingers is no more. But the information recorded in his Bequeathed Narratives presents the ruthless God-Emperor of the bleak continent of Kadish with a unique opportunity. Marak's writings could give him access to the rune that will grant omnipotence, the Eighth Rune, and then the God-Emperor would be invincible. A young rune priest and a sword master are sent to Carolia to steal the book – a near impossible task. At the same time Serina, a young Viguru priestess from Carolia, is taken captive by rune priests. She will face a time of cruelty and misery in the terrible Home of the Sisterhood, and a humiliating introduction to the God-Emperor.

Tropes in this duology: