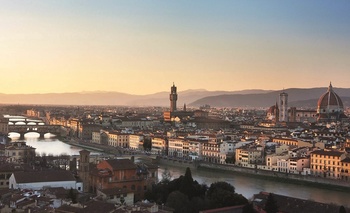 Florence (Firenze in Italian) is a world famous city in the region of Tuscany, in central Italy.

Once a powerful city-state and the cradle of The Renaissance, it is known in large part for the stunning amount of Renaissance and Classical artworks contained within; Michelangelo Buonarroti's David, one of the most famous sculptures in human history, calls Florence home. So does the Uffizi Gallery, one of the largest art museums in the world, which includes masterpieces of the Renaissance by Sandro Botticelli, Leonardo da Vinci and countless other famous artists.

In the Small Reference Pools of pop culture, a fondness for Florence is used as a quick and easy way of demonstrating a character's erudition and culture (either the heroic or villainous sort).