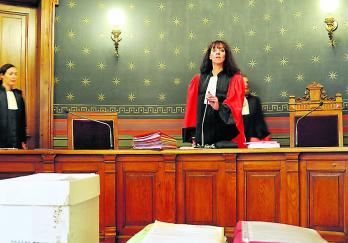 Let's begin with the fundamentals.

Firstly, the French law system is a civil law system and relies solely on statutory law — thus case law cannot be enforced there unlike in common law systems. That said, decisions in previous similar cases are persuasive under the principle of jurisprudence constante.

Secondly, due to France's involvement in The European Union, law is also influenced by the law and regulations emanating from the EUnote 80% of the French law is the transposition of these laws and rules..

Thirdly, due to the Revolution,note Revolutionaries were then wary of the Parlements

and their action against the state. the French juridical system is divided into two parts:

This is the stream which deals with the civil and criminal cases and includes several courts.

Law is wholly statutory in this stream and is drawn from statutes and legal codes.

Crimes are subdivided in three categories in French law:
Advertisement:

Fines can be awarded for petty offences and less serious misdemeanors.

In some older works, you can get references to circonstances atténuantes or "mitigating circumstances"; the court could award them to meritorious defendants so that their sentences could go below the minimum sentence.

Since 1994 the courts can award any sentence not exceeding the maximum given in law.note Felonies cannot be punished by prison terms going below one year — two if the felony is punished by life. Until recently, the concept of plea bargaining was unknown in French law. All criminal cases were tried, or dismissed. Now it does exist, but only for misdemeanors. Felonies are tried with a jury and three judges. All other crimes are tried without a jury. French judges also play for more of a role, calling and questioning witnesses of their own volition. This is called the Inquisitorial system, as opposed to the Adversarial system of Anglo-American law, where judges are to serve as impartial referees only. Some juges d'instruction or "judges of instruction" actually conduct investigations, though their use is limited.

Until 1981, the death penalty could be pronounced by the French courts for crimes ranging from aggravated murder (such as patricide), treason, and using torture during the commission of a kidnapping or other felony, all the way down to armed robbery and included desertion, arson or dynamiting of a house or causing death or setting a bomb near a public road.

A death sentence had to be executed through beheading by guillotine or, in cases of felonies against the state or when the guillotine couldn't be moved, firing squad.

Until 1960, travaux forcés, or hard labor, was a sentence available as a punishment for felonies and was Exactly What It Says on the Tin.

Until 1935 this sentence had to be served in French Guiana. Devil's Island was a common destination.

It was replaced by the sentence of criminal imprisonment.

Damages claims based on tortsnote known as délits civiles or "civil delicts", not to be confused with the category of crimes mentioned above, thus French law prefers to speak in terms of responsabilité civile or "civil responsability" linked to crimes are claimed by the victim (or in some cases third partiesnote the most common example being insurance companies claiming damages related to their policies - e.g. on a car they insured that crashed with another car) acting as the partie civile or "civil party". Their case is heard jointly with the criminal case, on the same procedure and with the same people judging the case. Thus, punishments and compensation for damages are metted out at the same time.

In some cases, persons other than tort/crime victims may join in as "civil parties", such as e.g. anti-racist organizations on racist crimes, human rights organizations on crimes against humanity, women's shelters in domestic violence cases, child defense groups in the case of crimes against children (i.e. child abuse), "public law persons" in the case of arsons and other fire-related crimes, or pro-transparency organizations on corruption cases. At times these may need victim consent in order to enter the procedure (that is the case of racist crimes when they are directed at individuals, or domestic violence, to mention two of the examples here; the other examples do not).

Sometimes it is "civil parties" rather than the public prosecutors office who start court cases. For this to happen, those who wish to become "civil parties" have to complain to the prosecutor about a certain action, and he will investigate. If s/he decides not to go forward, the complainant may then "constitute" him/herself as a "civil party" (constitution de partie civile) in order to cause a criminal investigation by an investigating magistrate (juge d’instruction). This is what happened most notably in the corruption case against the son of the dictator of

These are courts of first instance, which are the first courts to be used by claimants:

They are appellate courts, which are used by claimants and defendants for appealing in law and facts decisions issued by lesser courts:

These are courts with jurisdiction over a specific subject. They are classified as premier degré, and their decisions can be appealed as in normal courts.

Since 1981, military offences are tried in the normal justice system, albeit in specialized divisions of the courts.

The Cour de Cassation, or Court of Cassation, is the Supreme Court of the ordinary stream, and is subdivided in six divisions:

The Court of Cassation handles all appeals in law from all courts of the ordinary stream. Its function is to verify if the law has been correctly applied and to ensure that French law is applied uniformly across French territory.

This is the stream which deals with claims against the state.

These courts are rumored to be very slow, and some joke any final ruling will be issued after the death of the appellant.

Due to the lack of interest by the Parliament, courts had to develop legal doctrines to apply in the cases they had to settle. Thus French administrative law is more similar to The Common Law.

The courts pertaining to the administrative stream are:

Much like the ordinary stream, the administrative stream has courts specialized in a matter: The Sécurité sociale or National Health Insurance, also has a similar court system.

Additionally, rulings from disciplinary courts for school students and teachers, for inmates, for doctors and for pharmacists can be appealed in the Administrative Appeal Court.

The Conseil d'Etat, or State Council, is the supreme court of the administrative stream and functions like the Court of Cassation.

The State Council also has original jurisdiction in cases of disputes about the validity of an executive decree.

Here will be described courts outside the main judiciary organization.

The Conseil constitutionnel or Constitutional Council is a court settling electoral disputes.

This court also has powers of judicial review. Because of the 1789 revolutionaries being wary of the Parlements

and being enamored with the ideas of Rousseau,note He advocated popular sovereignty

. French statesmen were wary of the notion of judicial review.

In fact the Constitutional Council was created in 1958 with the sole mission of settling electoral disputes, and it was only in 1971 by its decision about a law aiming to restrict the freedom of association that the Council gained judicial review powers, and only on statutes which have not been yet promulgated. After the promulgation, the possibility of such review for a statute was lost.

Since 2011 the Council can exercise powers of judicial review during appeals from the Court of Cassation and the State Council.

The Cour des comptes or Court of Audit is charged with conducting financial and legislative audits of most public institutions and some private institutions, including the central Government, national public corporations, social security agencies (since 1950), and public services (since 1976).

It has original jurisdiction on financial matters involving national institutions, and appellate jurisdiction on rulings from Regional Courts of Audit. If financial irregularities are detected during the review, the person responsible owes all the lost money to the national treasury. Its rulings can be appealed to the State Council.

Having two judicial systems in a country can bring problems of competence, not unlike the situation in the US for federal and state courts or the divide between common law and equity in the UK.

The Tribunal des conflits, or Jurisdictional Court, settles jurisdictional conflicts between the ordinary and administrative streams and awards the case to one of the stream. In cases of contradictory decisions from both streams, the Court itself settles the matter without any available appeal.

France has thus four Supreme Courts — and we haven't started on the EU courts.