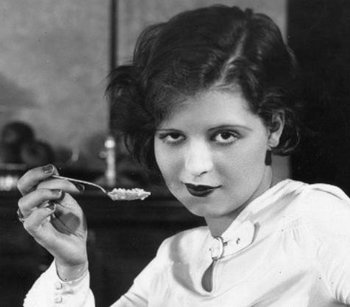 "The more I see of men, the more I like dogs."
Advertisement:

The Double Entendre nickname referenced the movie that made her famous: 1927's It. Breaking into the movies by winning a modelling contest at sixteen—after a horrific childhood in the New York slums, during which her mentally ill mother repeatedly tried to kill hernote waking up to find her mother had a knife pressed to her throat gave her lifelong insomnia issues and her father subsequently raped her—she quickly came to personify the new female freedoms of The Roaring '20s.

In a total of 46 silent films and 11 talkies, nearly all wildly popular (if usually dubious quality) romantic comedies, she invariably played the sexy, sassy, liberated flapper, complete with bobbed red hair and the latest fashion trends, out to land her man by any means necessary. She was the screen's top box-office draw in 1928 and 1929 and took second place in 1927 and 1930. In January 1929 alone she was said to have received 45,000 fan letters. Unfortunately, this huge popularity actually worked against her artistically; as long as fans would flock to the silliest dreck imaginable just because she was the star... why bother spending time and more importantly money on producing an actually good film around her?

Offscreen, her similarly breezy, uninhibited and down-to-earth attitude—complete with thick Brooklyn accent—was less of a popular success, earning her the fastidious scorn of a Hollywood establishment that had recently suffered a series of high-profile scandals and was now desperate to portray itself as high-class. Numerous affairs (albeit considerably fewer than legend reports) with the likes of Gary Cooper didn't help. Nor did the fact that she insisted on bringing dear old Creepy Dad to Hollywood with her. note having blocked out all memory of the assault until she went into therapy much later. He still wasn't exactly Father of the Year, as Hollywood did not fail to notice.

Ultimately, Bow is also notable for being a Short-Lived, Big Impact actor, in terms of career. Although (also contrary to legend) her accent didn't prevent her from making the move to talking pictures, she did develop a severe case of 'mike fright', unable to keep her eyes off it during filming. note (This was probably caused by an incident involving an exploding microphone during the filming of The Wild Party, her first talkie) Disenchanted with Hollywood, she abruptly married cowboy star-turned-politician Rex Bell in 1931, moved with him to a Nevada ranch and retired from acting almost immediately thereafter.

Two children, a series of nervous breakdowns and divorce swiftly followed. Diagnosed with schizophrenia probably inherited from her mother, she spent the rest of her life as a quiet, reclusive figure, only rarely granting interviews. She died of a heart attack at age 60.