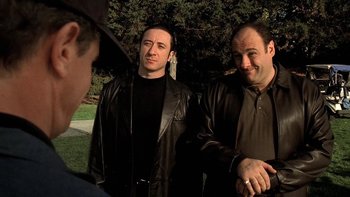 "One thing you can never say is that you haven't been told."
— Dr. Krakower
Advertisement:

Uncle Junior undergoes surgery for his cancer. The surgeon, who is named John Kennedy, claims the operation was successful and the tumor has been completely removed. However, when Junior visits him later, Kennedy reveals that more cancerous cells have been found in his body. Junior is reluctant to go under the knife again but has an inordinate amount of respect for Dr. Kennedy, apparently because of his name.

Carmela attends therapy with Dr. Melfi alone, as Tony (apparently) could not make it for this joint session. She shows signs of severe melancholy, and cries in front of Melfi, but is dismissive when Melfi suggests regular therapy with another psychiatrist - Melfi herself cannot treat Carmela one-on-one due to conflict of interest. Despite Carmela's insistence that she does not need any help with her mental health, Melfi recommends her to a mentor of hers, Dr. Krakawer. Carmela later visits Columbia University to discuss a possible donation to the college that would benefit Meadow's academic career. She visits Meadow while on campus and finds her largely burnt out by the college grind. They have a brief argument about Tony's racism towards her boyfriend Noah. Carmela meets with the dean and is charmed, becoming enthusiastic about making his recommended donation of $50,000. When she broaches the subject to Tony, however, he is completely opposed and only willing to donate as much as $5,000.

Tensions begin to escalate between Christopher and Paulie, who is now his boss. Christopher bristles when Paulie and Patsy Parisi order him to strip for the required wire search on newly made guys, and Paulie mocks his penis size. Later, Chris brings a large stash of stolen Adriana new shoes. She is happy with the new perks of being a made man's girlfriend, though somewhat disappointed that the shoes don't fit and Christopher will have to get replacements. Later that night, Paulie and Patsy show up to search Christopher's house, taking a cut of his swag, and Christopher sees Paulie sniffing Adriana's underwear.

Georgie the bouncer brings a Big Mouth Billy Bass - a toy fish that lip-syncs to various popular songs - to the Bada Bing and Tony finds it in his office. Though amused at first, he becomes unsettled when the Bass reminds him of his nightmare about the fish that spoke with Pussy Bonpensiero's voice and beats Georgie with the novelty item. Later, Carmela sees Angie Bonpensiero (Pussy's widow) at the supermarket, and strikes up a conversation. Angie complains about her financial troubles, suggesting that Tony's allowance to her is not enough to get by, especially now that her dog is sick. Carmela broaches this to Tony and he promptly visits Angie. When he finds a new car in her driveway he smashes the windows and intimidates her, noting her dog seems healthy and accusing her of trying to extort him through his wife.

Christopher tells Tony about Paulie sniffing Adriana's panties, and Tony reprimands Paulie in turn. Paulie confronts Christopher, ordering him never to go directly to the boss again. When Paulie visits Chris unprompted outside of a motel, Chris suspects Paulie might try to whack him, but instead Paulie wants to reconcile. He shows Chris the Billy Bass toy, and they bond by laughing at it.

Though Junior has the utmost faith in Dr. Kennedy, Tony convinces him to get a second opinion. The second doctor recommends chemotherapy and agrees to call a tumor board meeting with Kennedy present. Upon learning that he would have to work with another doctor he dislikes, Kennedy backs away from treating Junior. As Junior begins chemotherapy, he is disheartened by Kennedy's absence and his failure to answer any of Junior's calls. Tony brings Furio to a golf course to confront Kennedy, humiliating and intimidating him into visiting Junior again, also getting the somewhat arrogant man to admit he is "just a doctor".

Carmela, disheartened by Tony's behavior in between his philandering and unwillingness to donate more money to the college, visits Dr. Krakower. During their session, the morally stalwart Jewish Krakower confronts her bluntly with the harsh reality of the violent criminal she is married to, telling her that her only option to obtain a clean conscience is to take the kids and go. Carmela is shaken by this appraisal of her life. Tony finds her laying on the couch at home, and she tells him seriously that he needs to do something nice for her that day. Tony agrees to pay the $50,000 to Columbia, then offers to take her out for dinner.