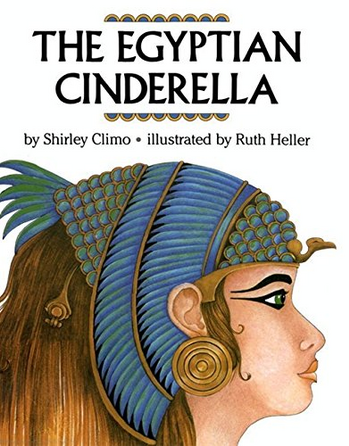 The Egyptian Cinderella is a 1989 children's book written by Shirley Climo and illustrated by Ruth Heller. It is an liberally expanded retelling of the Ancient Greek fairy tale of Rhodopis, which is the earliest known version of Cinderella (hence the title). According to Herodotus, Rhodopis was a historical person, namely a Thracian freedwoman of the 6th century B.C. who made a fortune as a courtesan in the Egyptian city of Naucratis; later a legend arose (first recorded by the historian and geographer Strabo in the first century B.C.) that Rhodopis had been taken to wife by the Pharao of Egypt after an eagle had dropped one of her slippers into his lap.
Advertisement:

Rhodopis is a Greek girl kidnapped from her home and sold into slavery in Egypt. Her master, an old man, is kind to her but spends most of his time sleeping, while the servant girls in his household bully and discriminate against her because of her fair complexion. She finds friends with the animals, however, and takes up singing and dancing to them. Her master sees her performing such a dance one day, and decides that such a gift deserves a reward. He gives her a pair of rose-red gold slippers, which becomes another excuse for the other servant girls to tease her out of envy.

Eventually, news arrives that the Pharaoh is holding court in Memphis, and all are invited to celebrate. The servant girls, however, leave Rhodopis behind with more chores to do while they go off to enjoy themselves, one of which is washing the laundry. As she does this, she accidentally splashes water onto her shoes and takes them off to let them dry. When she does, a falcon (the god Horus from Egyptian Mythology in one of his forms) swoops down and flies away with one of her slippers. Her response is of awe, knowing who it really is, and then to tuck the other into her tunic and go back to work.

Meanwhile, while the Pharaoh is sitting on this throne and starting to hold court, the falcon drops the slipper into his lap. He examines the slipper, knowing it as a sign, and then made a decree that all maidens in Egypt must try on the slipper, and the one whose foot fits it will be his Queen. In the search, he calls for the royal barge and travels down the Nile on it, pulling it into every landing along the way to find the slipper's owner.

Eventually, he arrives at the residence of Rhodopis's master, and all the servant girls rush to try on the slipper, recognizing it as Rhodopis's but saying nothing about it. Rhodopis herself, however, merely hides in the rushes.

While the girls try unsuccessfully to force their feet into the slipper, the Pharaoh sees Rhodopis hiding and asks her to try it on as well. She does, and pulls out the other one from her tunic, proving her identity. The Pharaoh, seeing this, declares that she would be his Queen, and they go on to live Happily Ever After.