"Why couldn't Xander be possessed by a puppy or some ducks?"
—Willow Rosenberg 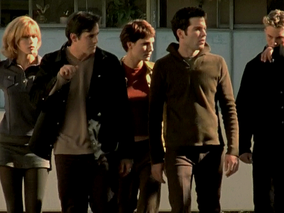 We open on a school field trip at the zoo. Buffy is harassed by four mean kids, but she brushes them off. The mean kids move on to harass some nice but nerdy kid, but Principal Flutie breaks it up. The mean kids decide to take the nerd to visit the hyenas, who are off limits for some reason. Xander goes after them to try to rescue him, but Buffy and Willow get stopped from entering the Hyena cage by some creepy zookeeper who says some creepy stuff about hyenas. Then the mean kids and Xander look into the green glowy eyes of the quarantined hyenas and get possessed by them. This all has something to do with Africa, as we learn from the insistent African-sounding soundtrack that goes on whenever the hyenas are around.

Xander doesn't seem quite right after that. First off, he doesn't like croissants anymore, he is mean to Willow and laughs at mean jokes. He seems to be in with the mean kids now, which is also very un-Xander. It seems that the metaphor might be that mean cliques act like a pack of hyenas, preying on the weak. There follows an epic dodgeball scene and an adorable scene where Buffy holds a piglet, but soon the episode goes from there to dark.The pack surrounds and eats the adorable piglet, and then Xander goes after Buffy and tries to rape her. (She hits him in the head with a desk.) After that, the pack (minus Xander) gets sent to the principal's office where they eat the principal.

They. Eat. The. Principal.

Buffy, Willow, and Giles enlist the zookeeper's help to transpossess the students (put the hyena back in the animals rather than the humans) and Buffy lures the pack back to the zoo. However, the zookeeper turns out to be planning to take the spirits into his own body. He knocks out and hides Giles, performs the ritual(with a knife at Willow's throat) and then tries to rip Willow's throat out. Xander tackles him and the zookeeper is thrown into the hyena enclosure. They haven't been fed.

Later, Xander asks the girls what he did while possessed. He freaks out at the idea of eating the piglet and is relieved to hear he was uninvolved in eating the principal. Buffy decides not to tell him about the Attempted Rape. Once the girls are gone, Giles arrives and tells Xander that he can't find any record of post-possession memory loss, then promises that the secret is safe with him.