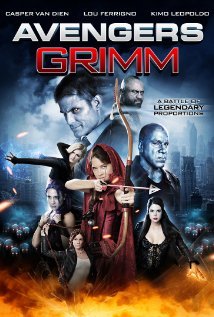 Avengers Grimm is a 2015 action film by The Asylum. At the start of the film, Snow White is urgently seeking news of her husband, the King, as Rumpelstiltskin storms her gates with his army of "thralls", revealed to be transformed people from the kingdoms he has already defeated. Rumpelstiltskin reveals that he killed Snow White's husband, and offers to let her live if she lets him use the Magic Mirror to go to Earth, a land without magic, so that he can conquer it. In the ensuing struggle, Snow White and Rumpelstiltskin tumble through the mirror. Shortly thereafter Sleeping Beauty, Cinderella, and Rapunzel arrive too late to help Snow White and are soon joined by Red Riding Hood, who's looking for one of Rumpelstiltskin's lieutenants, The Wolf. The Wolf arrives and attack, and in the melee, the mirror is broken and all are transported to Earth.

There, Snow White apprises the princesses of their situation and reveals that Rumpelstiltskin has become mayor over the years, and that they need to keep the mirror out of his hands. Unfortunately, the remaining shard was embedded in Red Riding Hood's shoulder, and she's already left to seek revenge on The Wolf. And so, they need to find Red, retrieve the piece of the mirror, kill Rumpelstiltskin, and get back home.

Has no connection whatsoever to the Marvel Cinematic Universe.