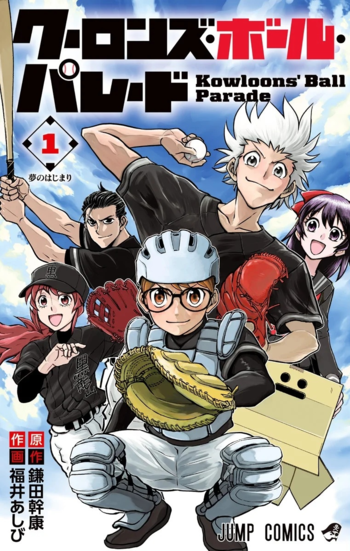 Nine Dragons' Ball Parade (Kowloon's Ball Parade in Japan) is a manga written by Mikiyasu Kamada and illustrated by Ashibi Fukui, which ran in Weekly Shonen Jump from February to July 2021.

Tamao Azukida dreams of making it onto Hakuo Gakuin's powerhouse baseball team, which consistently makes it to Koushien. He does extensive research and daily training to achieve his goal. But, at tryouts, he meets Tao Ryudo, a skilled pitcher, who thinks the two of them have what it takes to be a golden battery. When Hakuo Gakuin turn him down, Azukida agrees to join Ryudo and, with the help of Karin Kurotaki - the manager of the newly-re-established Kokuryuzan High baseball team and granddaughter of the chairman of the school board - they strike out on their own with the goal to recreate the Nine Dragons, the school's once legendary team who beat Hakuo for three straight years.