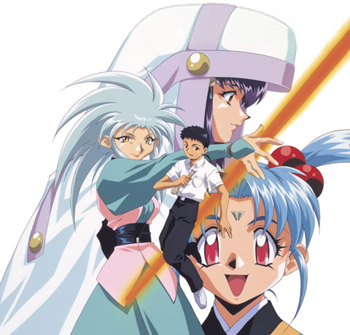 The first series, released from 1992-93 and directed by Hayashi, was mostly introductions to the major characters, who join Tenchi's harem via a Debut Queue. Episodes 5 and 6 bring in the first major villain, the space criminal Kagato. The second series, directed by Kenichi Yatagai and released from 1994-1995, includes some major revelations about the characters' pasts and features a new villain, Dr. Clay. The third series, again directed by Yatagai and released from 2004-2005 (yes, it took nine years to continue this story), focuses more on the characters' families and resolves some lingering issues from the first two parts. The fourth 4-episode series was directed by Hidetoshi Takahashi and was released from 2016 to 2017 (yes, it took almost another eleven years to continue the story again). The fifth six-episode series, directed by Keitaro Motonaga, premiered in February 2020 and concluded in May 2021.

The first two Ryo-Ohki OVAs were notably the first anime produced and released by NBCUniversal Entertainment Japan (back then known as Pioneer LDC).