No Glasses, No Life! 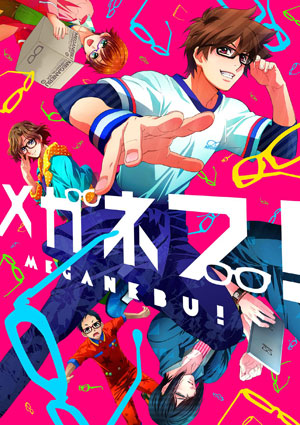 Akira Souma believes there are three kinds of people: those who wear glasses, those who don't, and the ladies. He's so convinced of this, that he has founded "Meganebu", a club for glasses wearers, at his school. There are a total of four members: Akira, Takuma, Yukiya, Mitsuki, and provisional member Hayato. Together, they will... show glasses wearers' superiority to the world, or something like that. And build X-ray Glasses.

MEGANEBU! started as otome Drama CDs, later adapted into a Slice of Life Comedy anime for the Fall 2013 season with a different cast. It is directed by Soubi Yamamoto (Kono Danshi series) at Studio DEEN, with character designs by Atsuko Nakajima. This article focuses on the animated version.

Advertisement:
SEE YOU NEXT MEGANE