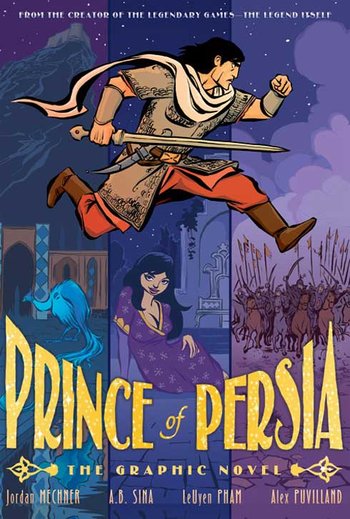 Prince of Persia: The Graphic Novel is a graphic novel written by A. B. Sina, with artwork by LeUyen Pham & Alex Puvilland, created by Jordan Mechner as part of the Prince of Persia franchise, and published in 2008 by First Second.

In the 9th century, Layth is the light of the city of Marv, a respected ruler but a weak man. His wife, Princess Guilan, is with child. Guilan's twin brother Guiv had been named as heir to the throne before his father Saman died, but Layth was placed on the throne by the actions of General Amir, whose soldiers keep a suspiciously vigilant watch around the palace. After Guiv is pardoned for attempting to kill Layth and Guilan in their bed, he dismisses an army of men waiting to fight and die for him and heads up into the mountains where he used to hunt lions with Layth and his sister to reach the deserted citadel in the mountains where the invisible prophet of Marv is rumored to live.

In the 13th century, Marv is suffering from a drought, since under the tyrannical rule of the Committee on Dangers Past, Present and Future, all water has been diverted to the royal orchards. A girl named Shirin is forced to end her dancing lessons because her instructor, Arsalan, has been banished by her father. She leaves the city searching for him and instead meets Ferdos, who for seventeen years has been raised in secret by his father Nuri, Guardian of the Water.

Tropes appearing in this graphic novel: