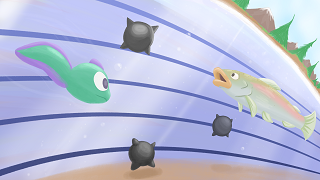 "Goooooo, little tadpole!
Find your waaaaaay back home!
Swiiim for that sanctum you seeeeeeeek!"
Advertisement:

Tadpole Treble is a Rhythm Game by BitFinity for the PC, Mac, mobile devices, and the Wii U released on May 6, 2016. It is notable for being spearheaded by Brawl in the Family writer Matthew Taranto and his brother Michael Taranto. It features Baton, a just-born tadpole in Opus Island who, after being snatched from her pond by Coda the pelican, has to make her way back home using a musical staff while collecting bubbles and avoiding notes and obstacles.

The game was ported to the Nintendo Switch in January 2021 as Tadpole Treble Encore, featuring additional unlockables and a new stage.