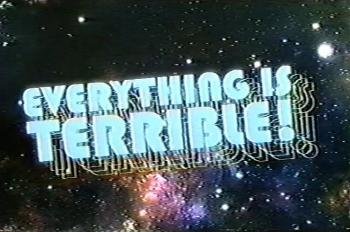 "If everything is terrible, then nothing is."

Everything is Terrible was created by three people known as Ghoul Skool, Commodore Gilgamesh and Future Shlock as a way of showing the world their VHS tape collection. All of them are so bad they're good. Common topics include outdated instructional videos (especially on using the Internet) and B- and Z-grade movies condensed into three minutes.

EIT not only post their finds on their Web site, but also travel around the United States holding shows that showcase their favorites. They have received media attention from various news blogs and even NPR. They've also released EIT: The Movie and a Christmas Special. There is also a second movie. 2Everything2Terrible2: Tokyo Drift and a collage, DoggieWoggiez! PoochieWoochiez!