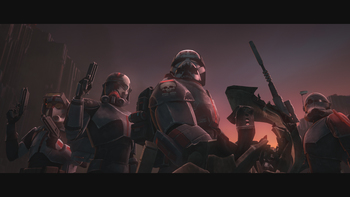 Embrace others for their differences, for that makes you whole.
Advertisement:

On Anaxes, Republic forces trying to hold the planet's key shipyards are suffering considerable losses. Captain Rex and Commander Cody come forward to Jedi Generals Mace Windu and Anakin Skywalker with a theory: the Separatists somehow know and are using Rex's battle plans and strategy algorithm. They propose sending a team behind enemy lines to the Separatists' computer center to figure out how they're doing it. However, Rex obviously has something else on his mind, not that he's willing to admit what that is to General Skywalker.

When Cody comes in to get Rex as they prepare to leave, he finds him staring at an old picture of the two of them with the late ARC troopers Fives and Echo. Rex admits that Cody might think he's crazy, which is why he didn't mention this to the Jedi, but the Separatists are using old battle plans that Echo helped him come up with, so there's a possibility that he might not have died at the Citadel. Cody isn't sure what to think about that.

Cody has called in an unusual force of clone commandos, Clone Force 99, to participate in the mission alongside him, Rex, Jesse and Kix: they're clones with "desirable mutations" that make them more effective in combat, and they don't usually work with "regs", although they have a history with the Commander. But when their gunship is shot down on the way in, leaving Cody too injured to continue, Rex winds up in charge...

Originally released as part of an unfinished story reel, the completed episode premiered on February 21, 2020.