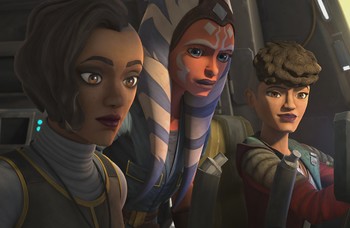 Ahsoka is helping Trace work on her spaceship, which Trace reveals she built from parts she saved up and bought herself, with some help from her sister, although Ahsoka isn't sold on Trace's name for the ship: the Silver Angel. Rafa, who mistrusts Ahsoka, believing there's no way she's doing what she's doing out of straightforward altruism, has a job for Trace, needing her after her former pilot backed out. Trace is insulted that Rafa would consider another pilot, but Ahsoka is suspicious about what kind of job Rafa has lined up. After Trace accidentally flies into military airspace, with the girls only avoiding arrest because the Jedi Cruiser they pass by is commanded by Anakin, who senses Ahsoka aboard the freighter and lets them go, the Silver Angel heads for a distant destination that Rafa doesn't want to tell Ahsoka about beforehand.

Ahsoka is concerned upon learning that Trace has never actually flown a starship before, which Rafa whispers is why she wanted a different pilot. When their destination turns out to be Kessel, home to the galaxy's most notorious spice mines, Ahsoka is even more concerned. And when Trace learns that Rafa intends to sell their cargo of spice to the notorious Pyke Syndicate, who might seize her starship, she panics and dumps their cargo, leaving the girls in debt to a dangerous crime syndicate and in even worse trouble...