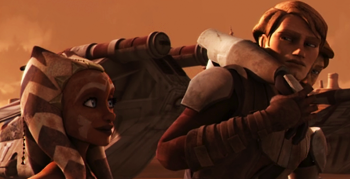 Believe in yourself or no one else will.
Advertisement:

Utilizing the opportunity granted by the clone army being stretched too thin, Geonosis rebels, and under the leadership of Poggle the Lesser, the planets' inhabitants restart the mass production of battle droids in their factories. Jedi Generals Ki-Adi Mundi, Obi-Wan Kenobi, Anakin Skywalker, and his Padawan Ahsoka lead the attack to capture the main factory and catch Poggle the Lesser in order to prevent Geonosis from rebelling again.

But this time, the Geonosians are ready for them and the Jedi are soon separated across the battlefront. The three parties must fight their way back to each other to complete their mission.