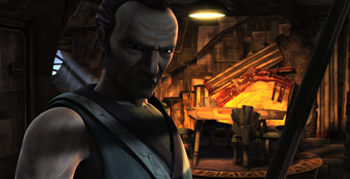 It is the quest for honour that makes one honourable.
Advertisement:

Obi-Wan, Commander Cody, and Captain Rex land on Saleucami to chase after General Grievous. While on patrol with Jesse, Hardcase and Kix, Rex gets shot in the chest by a commando droid. Fortunately he's not dead, but Jesse and the others take him to a nearby farm to recover. The farmer, one Suu Lawquane, isn't initially happy about the clone troopers' presence, but eventually relents and tells Jesse they can leave Rex in the barn. As Rex discovers later that evening when Suu's husband comes home, she has good reason to be reluctant about the presence of the Republic military: Cut Lawquane turns out to be a clone who deserted from the Grand Army, and Rex has to decide if he's going to report Cut's presence or not...