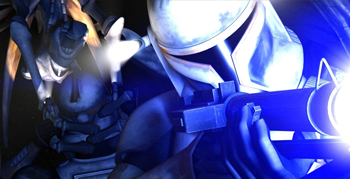 Sometimes, accepting help is harder than offering it.
Advertisement:

Geonosis has mostly fallen under Republic control, but Archduke Poggle the Lesser has evaded capture. Jedi Master Luminara Unduli is on his trail through a massive sandstorm that has grounded Republic ships and interfered with communications. Luminara and clone trooper Buzz track Poggle and his battle droids to the Progate Temple, which the Republic had thought cleared earlier. While searching the building, Buzz inspects a hole leading to the underground tunnels. Luminara calls in to inform Obi-Wan Kenobi and Ki-Adi-Mundi that Poggle appears to have entered the catacombs underneath the temple, when a scream is heard and the transmission cuts out.

After the sandstorm has ended, Anakin Skywalker, Obi-Wan, and Commander Cody arrive at the Progate Temple in order to search for Luminara. They find Buzz's body and Luminara's lightsaber and it's concluded that Luminara must have been taken below ground. The search party forms up and enters the tunnels.

The tunnels seem to stretch on forever, and there's no sign of Master Unduli — until Anakin and Obi-Wan get a brief message from her warning them to leave before she's taken down by some odd-looking Geonosians. Anakin and Obi-Wan decide to continue on, reasoning Luminara can't be far away. They are shortly attacked by a group of the odd-looking Geonosians, who they discover to be undead, kept mobile through some kind of parasitic control. They are extremely difficult to kill, and the search party eventually finds itself on the run. The Jedi decide they need reinforcements, and two clone troopers are sent to report back because they're so deep that their comm signals can't make it to the surface. They don't make it, attacked by the zombie Geonosians.

They eventually find their way to where Luminara is being held — the chamber of the Geonosian queen Karina the Great, whose existence was previously only rumoured. Karina wants to see if one of her brain worms can control a Jedi Master. The clone troopers position themselves around the edges of the room for an ambush and the Jedi walk straight in.

The ambush is sprung, Luminara is rescued, Poggle is arrested, and Karina is killed when the pillars supporting the ceiling of her chamber are shot out, causing it to collapse.