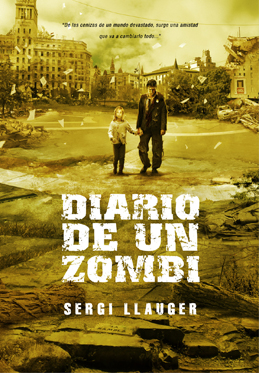 “Diary of a Zombie” (or “Diario de un Zombi”, in its original Spanish version) is a horror novel by Sergi Llauger about Erico, the world's only thinking zombie, a lonely and self absorbed 23 year old (or 1 year old, depending on if he's feeling more zombie than human) who is unliving out his days as the last conscious resident of a post-Zombie Apocalypse Barcelona. It's not all bad though, despite his slow and decaying body and lack of intelligent company he has the run of the place; he has personalized theater showings, all the books he could want, and no one trying to eat his face off... again. His world is eventually intruded upon by a chance meeting with the city's last two living survivors, Annette and Paula, a researcher trying to get her eight year old ward from Bacelona to the French Alps so her immunity to the zombie virus can be researched into a cure.

He reluctantly agrees to help them get out of the city, which is easier said than done since the city is still crawling with zombies and the relentless Archangels, biomechanical juggernauts that incinerate anything and everything that moves. The book deals with the tension of Erico's dual nature as a thinking and (somewhat) feeling human imprisoned within a decaying body with a slowly growing Horror Hunger, and his healing of his atrophied humanity through a growing friendship with Paula. The story is fleshed out with flashback of Erico's childhood in Italy and his life before dying. The impossible journey is filled with tense encounters with zombies out for Paula's blood, hardened bands of surviving humans, and the terrifying Archangels.

Sample chapters of the English edition can be read at Goodreads

. Sample chapters of the original version in Spanish can be read in the official website

This Book provides examples of: