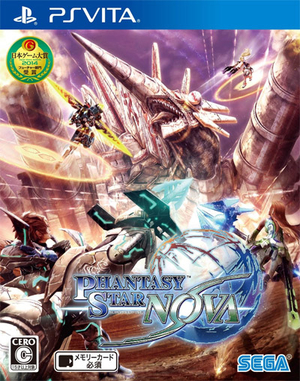 Phantasy Star Nova is the second Phantasy Star installment for The Eighth Generation of Console Video Games after the popular MMORPG Phantasy Star Online 2, and a Gaiden Game to said title. It was developed by tri-Ace for the PS Vita and published by Sega, and released in Japan on November 27th, 2014, and elsewhere in Asia on March 26, 2015.

You are a member of the Delta Valiant, a ship belonging to the ARKS Special Planetary Exploration Group, aka "Alter". As a subsection of the ARKS (Artificial Relicit to Keep Species), your mission is to scout unexplored regions of space for new planets that may be potentially colonized by the Oracle Colony Ship.

When the Delta Valiant approaches a barren planet known as Machia, the ship is suddenly shot down and crash lands on its surface. The crew discover that Machia lacks the "photons" that power ARKS technology, and thus have no way to repair the ship or defend themselves against its hostile inhabitants. That is until you meet Juno, a mysterious girl who grants you the power of "Gran" as a substitute. Now you must scour Machia for the parts you need to repair the Delta Variant while fighting against the Gran Darkers and colossal "Gigantes" monsters which roam the world.