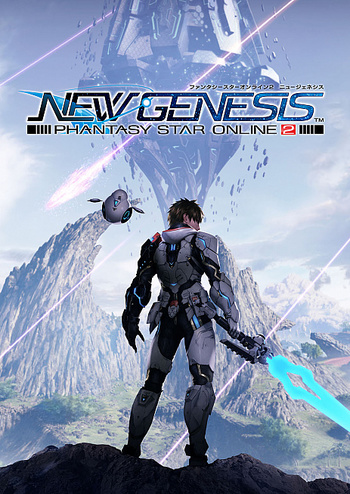 Long ago, the space colony of Oracle, who pioneered the use of an advanced particle energy known as "Photons", fought a seemingly endless struggle against the Falspawn, creatures of evil whose sole purpose is to destroy all there is in the universe. With the aid of a special individual known as the "Guardian" and their allies, Oracle finally put an end to the cycle of fate and destroyed the source of all evil in the universe once and for all.

It's been 1000 years since Oracle's final battle. ARKS, now settled on the planet Halpha, have spent decades protecting their new home and its inhabitants from the mysterious DOLLS, enemies from regions unknown with even more mysterious purpose. Further complicating matters is the appearance of the Meteorn, entities who appear on Halpha via pods who have no memory of their past but have unparalleled skill as ARKS, oftentimes joining their new allies on the front lines.

One such Meteorn, the Player Character, crash-lands on the surface of Halpha and is intercepted by Aina, a young ARKS and Halpha native who hails from a beachside village in West Aelio called Aelio Town. Officially recruited into the organization, the protagonist must team up with Aina, their mysterious fellow Meteorn Manon, and the many, many planetside ARKS to solve the mystery of the DOLLS and their own past.

Phantasy Star Online 2: New Genesis (officially shortened to "PSO2:NGS" or simply "NGS") is a "title" in SEGA's Phantasy Star series and a sequel to Phantasy Star Online 2. Despite having the appearance of a new game, New Genesis released in the form of a large-scale update to the original PSO2 and co-exists alongside the original game. The update released on June 9th, 2021 in Japan on the PlayStation 4 and PC (with Cloud versions for Nintendo Switch and PC), while it released elsewhere at the same time on the Xbox One, Xbox Series X|S, and PC. The Global version received its PlayStation 4 port on August 31, 2022. Japanese beta tests were held between January and February 2021 and during April 2021, and an English version beta was held in May. A character creator/benchmark program for the game was released globally on May 25th, 2021.

New Genesis represents a dramatic shift in the format of the post-tetralogy Phantasy Star series; while the original game took the features and gameplay of Online and Universe and built upon it in its own way, New Genesis diverges completely into new territory with the introduction of a Wide-Open Sandbox (dubbed "open-field") where rather than accepting Quests from a Hub City and moving into instanced rooms, players can now traverse a large, seamless open world at their leisure that is populated with a wide variety of landscapes and creatures as well as dangerous foes. In lieu of a traditional Quest system, players are guided around the world with Tasks, an updated version of the Client Order system that functions like a typical "objectives" system. Players are still able to participate in instanced content in the form of Cocoons/Towers, structures scattered throughout the world that provide a variety of battle and platforming challenges, as well as the return of PSO2's Urgent Quest system. Combat is also more fluid and streamlined than ever before; taking cues from PSO2's revolutionary "Scion Classes", characters now have access to more freedom in both mobility and battle, such as the ability to "Photon Glide" in the air to approach from above and access to an expanded Subclass system. Six of PSO2's original classes return in a heavily revamped and actionized form, with the Braver, Bouncer, and Waker (based on PSO2's Summoner) classes added post-launch. A brand-new 10th Gunblade-wielding class is set to debut in the near-future.

Most notably, since New Genesis is not actually a "new" release but rather an update, the game features backwards compatibility with Phantasy Star Online 2. Players are able to move characters between the original game and New Genesis, and along with it access to all unlocked storage boxes, all unlocked character cosmetics such as costumes, Layered outfits and Accessories, and most equipment (scaled accordingly), with the ability to inherit your Mag's appearance planned for a future update. Players can also bring forward any ARKS Cash and Star Gems in their possession as well as an active Premium Set and its benefits.

Much like the original game, New Genesis has been spun off into derivative works and other titles, which include: