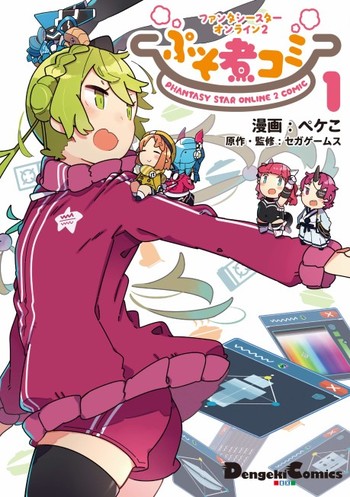 Ni-Communication~
Pusonicominote The name is wordplay on the Japanese pronunciations of the letter "P", "SO", and "2", the latter of which can be read as "ni" is an online Japanese Gag Series web comic based on SEGA's hit Online Action RPG game Phantasy Star Online 2 and illustrated by Pekeko. It was initially released in January 2018 and was produced through January 2020 for 100 comics, with new comics published weekly (during scheduled maintenance for PSO2). An English subbed version of the comic began running in 2021 on the Global version's official website

Unlike the previous adaptations of the game, two of which were canon and all of which took themselves (and PSO2) seriously, Pusonicomi takes a gag manga twist on the series. The webcomic follows the misadventures of PSO2 player Mitarashi and her friends as they Quest together, hang out, and just generally have a good time online.

In December 2018, it was announced that the series would be receiving an anime adaptation aptly titled "Anime Pusonicomi", which premiered in January 2019. It is also released weekly through the game's official YouTube channel, with episode being roughly 3 1/2 minutes in length adapting two comics per episode. This was later followed up by a second season called "Anime Pusonicomi Okawari", which premiered on April 7th, 2020. The animated series was briefly revived in May 2021 with two double-length episodes themed around Phantasy Star Online 2: New Genesis ahead of the update's June 2021 release.

After the webcomic's end, the series was promptly followed up by a Spiritual Successor called Mani Mani ☆ ARKS, which is very similar in cast design and structure.

In June 2021, it was announced that a new season of comics will be produced to coincide with the release of Phantasy Star Online 2: New Genesis. Titled Pusonicomi NGS, the new season continues the adventures of the cast in New Genesis and the world of Halpha.