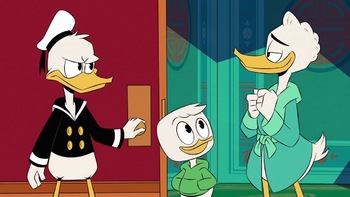 Loose as a goose and ready to gander!
"Finally, a proper adventure!"
Advertisement:

Donald competes with his cousin Gladstone Gander to impress Louie at a mysterious resort in Macaw, while Scrooge tries to lure the kids away from the resort's endless distractions to go treasure hunting.