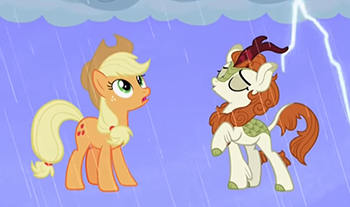 Applejack and Fluttershy are called by the Map to solve a friendship problem in a far-off location known as the Peaks of Peril. Twilight tells them there's little known about the area, even from Rockhoof, outside of a race called the "Kirin" that are peaceful and trustworthy, but warns them about the "Nirik", a dangerous species that also live in the area. The train takes them to the last stop on the line, where the lone station attendant re-iterates the warnings about the dangers in the area, but directs them to a ring of mountains where the Kirin are reported to be.

En route, Applejack and Fluttershy get into an argument, when Fluttershy stops to help a small group of squirrels, which Applejack insists they don't have time for. However, the squirrels show the pair a hidden cave to enter the mountains far more easily than Applejack's intended route. Past the cave they find a village and are met by the Kirin, who do not speak and only nod or shake their heads in response to the ponies' questions. Applejack believes it impossible to solve the friendship problem without communication, and asks impatiently if they would talk. The village leader points her to a dark forest path which immediately scares Fluttershy. Applejack agrees to explore the path on her own while Fluttershy stays in the Kirin village to try to learn more from the local animals.

Far outside the village, AJ comes across another Kirin, who initially appears as silent as the others until she breaks out in laughter. She introduces herself as Autumn Blaze, and finally having someone to talk to, after years alone, is happy to explain (in song even) what has transpired: years ago, the Kirin did speak, but one day an argument broke out, causing the Kirin to become flame-wreathed creatures, the Nirik, and their village to be destroyed by their flames. Their leader, Rain Shine, ordered all the Kirin to bathe in the magical Stream of Silence, which not only calmed their tempers but also prevented them from speaking. Peace returned to the village, but for Autumn it became boring not to be able to express any emotion. One day, she accidentally fell into a patch of Foal's Breath flowers, which were able to return her voice. Pleased with herself, she showed her discovery to the village, but none of other Kirin accepted her, and Rain Shine forced her either to return to the stream and lose her voice once again, or be evicted from the village. Applejack realizes this is the friendship problem they have to solve, and prepares to return to Fluttershy to find more Foal's Breath, but Autumn assures her she hasn't been able to find any since.

In the meantime, Fluttershy has also come to learn the history of the Kirin, but she thinks that the solution they found is the best answer to stop their tempers rising again and ruining the village. Applejack and Fluttershy start arguing. In response, the Kirin grab them with their magic and take them to the Stream of Silence, intending to remove their voices. Just then, Autumn arrives in her Nirik form to save them, showing the other Kirin that she is able to control her anger and revert back to normal. Applejack and Fluttershy also show the Kirin that while they may get into arguments, they know how to calm themselves, and this is something the other Kirin can learn. The other Kirin indicate they want to get their voices back, but Autumn still frets that there is no more Foal's Breath to obtain. One of the squirrels that Fluttershy helped earlier gets their attention and leads them back outside the mountains, showing a patch of Foal's Breath, and Applejack apologizes for not wanting Fluttershy to help the squirrels earlier. Back in the village, they give the Foal's Breath to Autumn, who mixes up the cure in the village fountain. The Kirin all happily drink and regain their voices, and Rain Shine thanks both Autumn and the ponies for their help in showing the error of their ways, and further invites Autumn to return to live in the village.