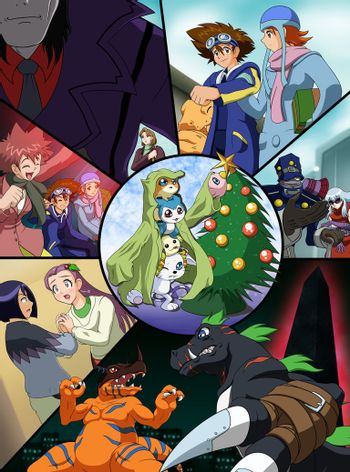 This piece of fan-art

, by Jet-Stiker on Deviantart is for Chapter 43: A Very Digi Christmasnote Top left clockwise till center: Nancy and Oikawa meeting each other; Tai and Sora together; Mummymon and Arukenimon enjoying christmas; Greymon vs Tyrannomon with the Spire on the background; Ken and Yolei; the concert with Jun on the foreground; and the In-training Digimons creating a christmas tree
The year was 2004, five years after our first journey...
Advertisement:
The world had changed almost overnight, and was not the friendly one I had grown up with... but such things were beyond my comprehension.
For us children, five years was forever, and we all grew and changed...
At first, I saw it all as a grand reunion...
...But little did I know what fate had in store for us.
— The opening narration for TK's new novel

The Story We Never Told

The story is sometimes referred to by "Digimon Adventure 02-R" by its author. The story was first posted on Fanfiction.net on January 5th 2007 and completed on May 19th 2017.

The Story We Never Told provides examples of: