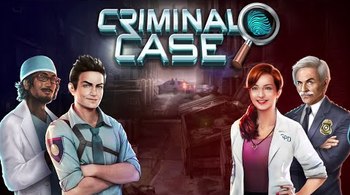 The saga starts here!
The first game of the Criminal Case series, released on November 15th, 2012. It was later named "Grimsborough", to distinguish it from the others.
Advertisement:

The player character begins the game as a rookie police officer in the Grimsborough Police Department, partnered with a detective named David Jones to solve all sorts of gruesome murders in the city. Along the way, they and Jones have to contend with various quirky, shady, and outright bizarre characters, including the bumbling beat cop Ramirez, the mob boss Tony Marconi, and the business mogul Alden Greene.

Grimsborough is divided into six districts, each one with its own set of cases, Story Arc, and antagonists - The Industrial Area, the Financial Center, the Historical Center, the Grimsborough University, the neighborhood of Maple Heights, and the Airport.